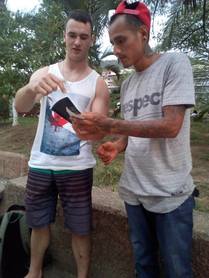 This is only one amazing story. This man was looking for us and cried out to us; he asked us “Are you Christians?” He told us that his wife shared with him about us, because one day before she accepted Jesus by praying with us and she encouraged him to do the same.  We shared the plan of salvation and asked Him if he was sure he wanted to receive Jesus for himself and not because his wife asked him to. He was totally convinced this was what he wanted and the team led him in prayer.
​ 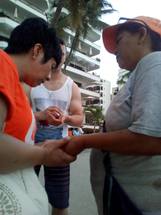 ​“The Living Water.” This Lady found us for a second time. The first time one of the team shared just water with her because she was not interested in the Gospel. The second day She asked us , “Please tell me what did you put in the water that you gave me yesterday.” We told her that nothing but water was in the bottle, it was new. She told us that around one month ago she lost her husband and she was depressed so deeply and after she drank the water she felt a peace that never felt before and was so comfortable. We told her that God was looking for her and we shared the Good News and she accepted Jesus into her heart.
​ 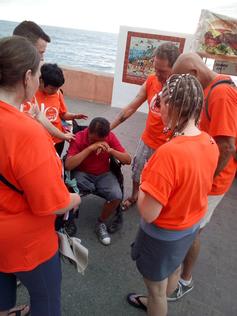 ​Every story was incredible in itself. This believer, after his accident lost his leg. He was having a hard time finding a job and a place to live. He asked for prayer, and we encouraged him to go back to church and to begin reading the Bible again. He told us: “You guys are no accident; God is reminding me that He is with me, through you, and he was in tears. He came to the breakfast at The church and Pastor Frank and John got him in touch with Paradise Village to seek out housing there. We believe this happened because we did not see him after that day. 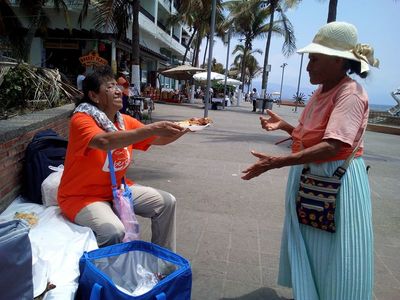 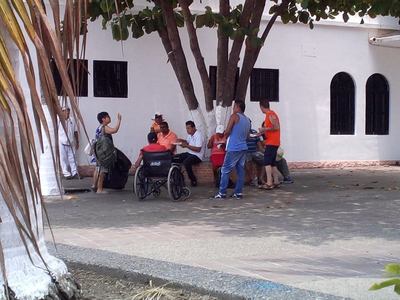 Free Meal  at the Malecon . We found aboriginal people who had a heart for listening to us but it was hard for them to go the Church for the free breakfast because of their trying to sell their goods to bring money home to other cities to their families. We tried, for first time, to feed them a free meal on the boardwalk. As they ate Elsa preached in Spanish and John to the folks who spoke English. We feed around 25 people. It was amazing!  Seven of these beautiful people accepted Jesus into their hearts.   ​